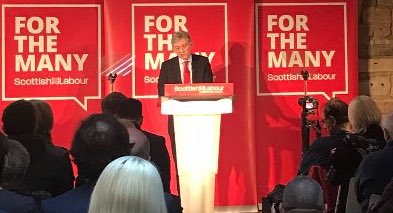 After a bruising, unexpected and unnecessary leadership contest Scottish Labour’s new leader Richard Leonard will have the whole party behind him as he faces three big challenges.

The first is the one which Labour has struggled with over the years. After narrowly beating us in 2007, and then trouncing us in the elections between 2011 and 2015, the Scottish National party replaced Labour as the centre-left party of Scotland. They were more professional, more talented and more organised.

For Labour the last decade has been maddening. The nationalists dominated the centre ground of Scottish politics by offering small, populist policies for everyone. The poorest Scots suffered horrendous cuts to local services, poor kids have fallen further behind in education, and the health gap between the rich and poor has gone untouched. They did this while claiming Labour had lost its way and abandoned working people. The SNP finished us off with pure nationalism: it was not just that we were wrong, they said, it was that we did not care about Scotland at all.

Leonard is well placed to disrupt the frames that have worked so well for nationalists. After a lifetime as a trade union leader, he speaks with authority and real intellectual depth about the need for a fairer economy. He comes to leadership at a time when people finally realise that the Scottish government is powerful. The SNP’s deflection of every problem as being Westminster’s fault is beginning to sound old.

Most interestingly though, Leonard is a Yorkshireman. This will disarm the SNP’s oldest and most effective trope. When the SNP would attack previous Labour leaders with the dog-whistle attack of ‘working for London masters’ or being ‘London Labour’, it worked for them. They must now know that throwing these insults at a leader with an English accent would look like ugly ethnic nationalism.

So, Leonard can rebuild Labour’s brand, convincingly tell a story about change and take apart the excuses of nationalism. However the second big challenge Labour faces will be more difficult.

Labour lost badly in 2015 and 2016 in large part because those who had voted ‘Yes’ to independence in 2014 thought we were too strong on the union. Ironically, just as those voters started to return to Labour in 2017 we lost because ‘No’ voters did not think we were strong enough on the union. We convincingly offered change and won back thousands of es voters from the SNP, but we lost almost exactly the same number of voters to the Tories who told No voters that we were too weak to be trusted on independence.

Were it not for the Tories picking our pockets of pro-union voters the SNP would have lost almost all their seats to us. In the 25 seats where Labour is now in second place to the nationalists in Scotland, 21 of them saw a surge in Tory votes which was greater than the eventual SNP majority.

So Richard faces a three-way battle for dominance of Scottish politics. He must win back non-nationalist es voters with a strong message on change while reversing the more recent losses we have made to Tories by proving his anti-independence credentials.

That is linked to the third challenge our new leader faces. Where Scottish politics goes now is now inextricably linked to Brexit. In a three-way contest, Labour needs to be able to credibly attack the Tories over the mess they are making over Brexit. Ruth Davidson understands that risk and is trying to paint her group of Scottish members of parliament as a counter to the more extreme Brexiters in the Tory party. However there will come a crunch point where they will have to choose between backing hard Brexit or voting against their own government.

Likewise the SNP are currently without direction as they lose confidence in the winnability of another independence referendum. The uncertainty of Brexit has made people more risk adverse rather than driving them into the arms of nationalism. Nicola Sturgeon’s only hope of reopening the question that was settled in 2014 is a national crisis caused by a no-deal hard Brexit.

To effectively fight both the Tories and the SNP, Labour should be unambiguously pro-union and anti-hard Brexit. These positions are not only the right thing to do, the only credible position for an anti-austerity, pro-jobs party. But there is also a political imperative for the leader of the Scottish Labour party to be leading the argument against hard Brexit within the Labour party. We need to be at the front of this argument rather than supporting the softly-softly approach of the United Kingdom Labour party leadership.

Blair McDougall was the candidate for Renfrewshire East and director of the pro-union campaign Stronger Together in 2014. He tweets at @blairmcdougall